“Memories are so beautiful,” as the song goes. And it is so very true! This was proven once again amid the bright lights, glitzy shows and glamor of Las Vegas by members of my novitiate class and others who were with me at various points in the process of my SVD formation. We were all there together in Las Vegas from Oct 6-9, not whooping it up like those all around us, but savoring the good times we shared at various points along our common journey.

The seniors who made up our little group included: Edwin Bushu, now a priest in the Diocese of Guam, Rich Bohr and his wife Karen, who live in Henderson, Nevada, Pat Weldon, who came without his wife Mary (a little disappointment to Mel because over the years she has been his faithful dancing partner), Dennis Williams from Georgia, Wiley Bowers from Wisconsin and Tom Touney from Iowa. Dennis was with me in High School in 1962. Wiley and Tom were with me at Epworth in the 70’s. Edwin and Dennis were with Jon Kirby in Ghana with, so he was adopted into our group.

My novitiate classmates and I are like family. Our journey together began in 1965 and the bond seems to get stronger every year! Now this bond includes the wives and children of those who have married.

What could be more exciting than gambling and show-going in Vegas? Right? Wrong! Not so for us! We spent most of our time just telling stories to each other in the beautiful rooms of the Wyndham Grand Desert Resort which were generously provided for us by Rich Bohr and his wife Karen. The only one to see a Vegas show was Jon who had booked far in advance to see the David Copperfield magic show. But that’s not to say we didn’t have any fun. 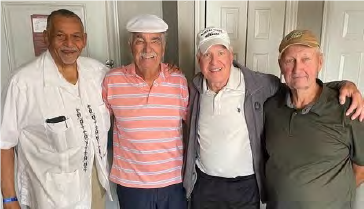 We had some fine times together, including a number of meals—one of which was a fabulous dinner celebrating the birthday of Rich. We also celebrated an inspiring mass on Saturday evening. After mass we played a game called “The Five Second Rule.” It was a quiz game on various topics where you are expected to give three answers in less than five seconds. You have to think fast and Dennis won hands down. The rest of us are slowing down in more ways than one.

One of us who hails from Canada, took six or seven whole seconds with a couple of “ahhhh’s” thrown in to name three US states bordering his country.

The other day, brother Don Champagne, who is the classmate of Steve Pardy, turned up at our Riverside Residence. You can be sure that a lot of water has flowed under that bridge, and so we joyfully jumped in. Don, Steve and I got together and had a wonderful time sharing the “good old days.” The next day, we hooked up with Joe Miller and Herman Manuel and we continued our reminiscences while enjoying the special buffet dinner offered at the Barona casino near San Diego. Even though we didn’t win much at the gambling tables we couldn’t be called losers. We hit the biggest jackpot of all just sharing those precious memories together. 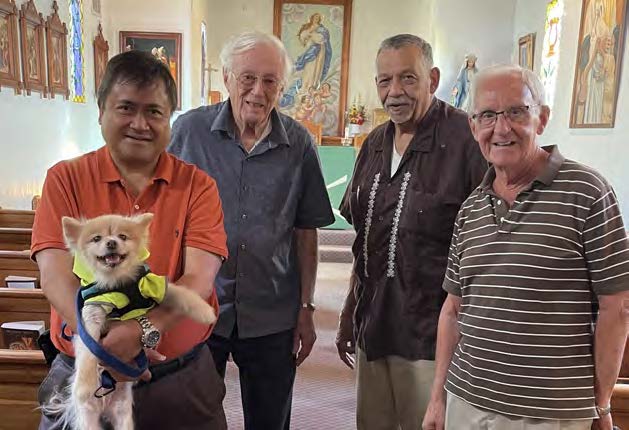