In the early 1900s, Divine Word Missionary leaders set out to establish a second mission house in the eastern United States. After much consideration and searching, the Society of the Divine Word purchased a 527-acre farm on Hemlock Lake in New York’s Conesus Township in 1924. 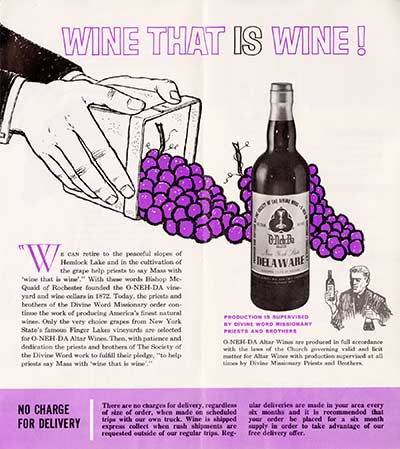 The property was previously owned by the Catholic Diocese of Rochester and was known as the “Bishop’s Farm.” While the earliest bishops had mild success operating the farm and vineyard on it called O-Neh-Dah, the last bishop to oversee the property was struggling with the operations.

The first few years that the Society owned the property weren’t exactly fruitful. No one knew how to successfully revive the failing vineyard and all early efforts fell flat. Even the existing wine that was a part of the purchase eventually went bad. In 1929, the U.S. government gave the Society permission to destroy it. In 1928, the provincial superior dissolved the community, deeming it simply beyond the Society’s means to make a success of the O-Neh-Dah label.

The new bishop agreed to allow Divine Word Missionaries to start a seminary for belated vocations on the Conesus property in 1935. It signified a major shift in the purpose of the site from agriculture to education, with a new focus on mission awareness and vocation preparation.

In 1936, St. Michael’s Divine Word Seminary opened with 25 students. Early in the seminary’s history, Sisters of St. Francis from Vienna, Austria provided a number of services to the school community, including cooking and laundry. A new convent was built for them in 1941 and they served the people at St. Michael’s for more than 20 years. After they left, Italian Sisters from the Daughters of St. Mary of Leuca order took over similar responsibilities.

Between 1940 and 1960, modern farm buildings were constructed, as well as a seminary chapel. The winery was also updated with new machinery. Divine Word Missionary Brothers started overseeing the vineyard at this time. 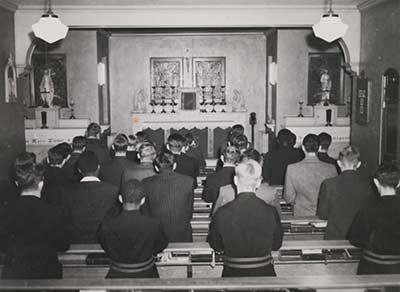 Then in 1947, the belated vocations program was relocated to Bordentown. Conesus transitioned to a novitiate and high school for young men interested in becoming Divine Word Missionary Brothers. St. Michael’s added a clerical novitiate in 1950 and five years later, a junior college.

During the 1957 school year, 214 men lived, studied and worked at Conesus, the most in the site’s 62-year history. However, enrollment declined in the years that followed and in 1965, the college students were moved to Epworth. By 1969, the Brotherhood program was closed, too. A small number of priests and Brothers remained at St. Michaels for several years until the doors to the seminary closed permanently in 1984. The Society sold the land and buildings to a small unaffiliated religious group called Trinity Institute in 1985.

The text of this page is an adapted version of Communities of the Word, The Conesus Story by Mr. John Morgan.