In 1958, Pope John XXIII, together with the Congregation for Religious, issued a decree that stated a Pastoral Year would be added to the formation of all newly ordained religious priests. The Divine Word Missionaries in the United States selected the Washington D.C. area as the home of this newly added piece of their formation puzzle. With finances already tight as the congregation strained to support the buildings in Perrysburg and Epworth, leaders looked for a fiscally responsible option. Around that time, the Mission Press at Techny burned to the ground and it was decided that it would not be rebuilt. The insurance money from the fire was earmarked for a new Divine Word House of Studies in Washington D.C., effectively solving one problem. However, another issue came to light at this time, as many of the Techny Brothers had worked at the press, so its unexpected and tragic closing left them in uncertain circumstances.

In 1960, the Society of the Divine Word purchased a Washington property from the Marianist Priests and Brothers. It included lots 8 to 11 and 824 in square 3883 between 12th Street and Michigan Avenue NE. They proceeded to acquire the adjacent privately owned plots 1, 2, and 3 to enlarge the total area. The new “Divine Word College” building was constructed facing Michigan Avenue and in 1962, the student residence building was dedicated. It was never intended to serve as a “college” in the American sense of the word, as there were no classes held in the building and no degrees were ever awarded there. The name of the building was never even posted outside. The five-story building included air conditioning, 53 residence rooms that each had a bathroom and other comfortable amenities that earned it the nickname “SVD Hilton.” 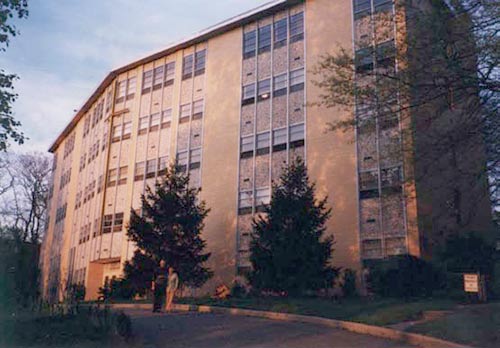 year program in Washington D.C. was short-lived. The 1959 ordination class was the first group to participate, living in the three houses that made up the Divine Word House of Studies. The ordination class for the following year was too large to fit in the three small houses, so the group of 30 was divided up: 13 were appointed to DC for the pastoral year, several went directly to the Philippines to begin their mission assignments, and others stayed at Techny or went to St. Anselm Parish in Chicago to commute to De Paul University for a pastoral course.

In 1962, the residents of the three houses that made up the Divine Word House of Studies relocated to the new Divine Word College building that faced Michigan Avenue. Records show that the pastoral year program lasted just five years in total, from 1959-1962 and also 1964. In addition to the pastoral program students, the new Divine Word College building housed overseas missionaries or members of the United States provinces assigned to study in Washington.

With the three small houses collectively known as Divine Word House of Studies empty and starting to deteriorate, the Society sold the properties in the early 1960s.

After the pastoral program fizzled out, the college served as a place for Divine Word Missionaries to live while pursuing graduate studies. In 1966 when the building was under capacity, the Society agreed to provide accommodations for diocesan and religious priests and Brothers in order to fill the building and keep it financially viable. In the 1970s, the number of Divine Word students in residence started to decline. In the 1980s, the average number dropped down to just six. The following decade, there was a slight increase in the number of Divine Word Missionaries living at Divine Word College but only one of them was from the United States Provinces. During the 2000s, that number was two. In 2005, Divine Word College in Washington closed and the Society sold the property.

Back when the Society purchased the land to build Divine Word College, one piece of property had a two-story house on it. Through the years, it served a variety of purposes. It was home to staff, as well as kitchen and laundry workers, it served as the provincial office for the Eastern Province at one time and after the realignment of provinces and creation of the Chicago Province, the little house was empty. That is, until 1990 when the Society established it as “Wendelin House.” 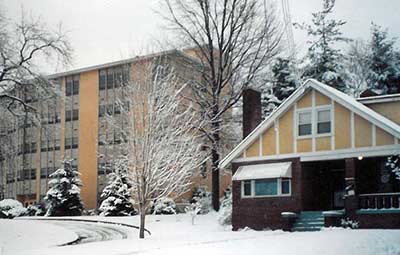 the first Divine Word Missionary sent to the United States, the it served as a formation house for Brothers in temporary vows, candidates completing the Associate of Arts Program in Mission Preparedness at Divine Word College and candidates of the province’s Associate Program who were seeking preparation in a professional site in the Province.

In 1997, an evaluation of the Wendelin House formation program concluded that it was largely successful. Still, the evaluation team made a few suggestions for improvements, including that the Province consider alternative options for pre-novitiate Brother formation. As the number of Brotherhood candidates decreased, reaching just two Wendelin House residents by 2001, it seemed that the recommendation would be needed sooner rather than later.

The program in Washington was discontinued and, temporarily, relocated to St. Anselm’s Parish in Chicago.

After the sale of the Divine Word College building, the Chicago Province purchased a property named Ryan Hall at 832 Varnum St. NE in 2005. The 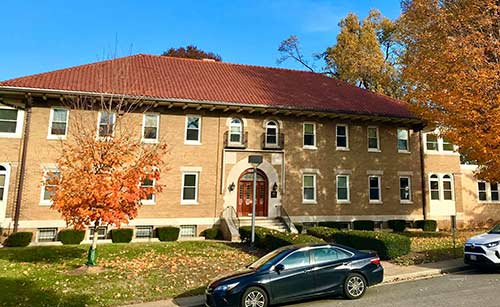 residential property was renamed Divine Word House. It’s primary purpose was to serve as a residence for Divine Word Missionaries pursing graduate degrees, much like Father Ralph’s House and Divine Word College. It was also intended to be a place from which outside pastoral ministry could be undertaken and lastly provide space for Society administration, when needed.

The text of this page is an adapted version of Communities of the Word, The Washington DC Story by Fr. Thomas Krosnicki, SVD.