With the first American SVD location at Techny booming in the early 1920s, leaders started looking for a way to expand. In 1921, Novice Master Fr. Herman Richarz and Bro. Wendelin Meyer toured several sites in search of a new property where the Society of the Divine Word could educate novices. They selected a 60-acre property near East Troy, Wisconsin, just northwest of Lake Beulah. Its proximity to Techny made it desirable and the serene, secluded atmosphere was just what they thought novices needed.

Aside from a small portion of farmland, most of the property was wooded. There were two cottages and a few smaller buildings that were all intended for summer accommodations, so they weren’t equipped with furnaces.

Seminarians helped prepare the grounds and in September, the first group of 12 novices moved in. By Christmas, a furnace was installed but in the coming years, it was a struggle to afford coal to keep warm.

Spring and summer in Wisconsin were a different scenario. Fishing, swimming and rowing were frequent pastimes when the weather was favorable. In addition to serving as a novitiate, members of the Society occasionally visited the East Troy location to rest and relax at the lake.

In 1923, the Society purchased a 175-acre property on the opposite shore of Lake Beulah and soon after, constructed a new building that was dedicated as Holy Ghost Novitiate. When the lake froze solid, the items from the old building were carted across the ice to furnish and fill the new structure.

In 1937, the novitiate was transferred back to Techny and the Techny Preparatory Seminary, a high school program, was transferred to East Troy. The school became known as Holy Ghost Mission House and 100 students attended the first year. Seminarians from Techny continued to spend their summers at East Troy.

The priests at the school helped in neighboring parishes on the weekends.

During World War II, enrollment figures declined and in 1942, just 46 young men attended the high school. Members of the Society tried to boost interest by going to parishes, schools and vocation clubs to show movies about missions and talk about the congregation’s purpose. East Troy was classified as a “Divinity/Seminary School,” which deferred students from the military draft of WWII.

In 1947, the provincial agreed to open the house for lay retreats.

From 1949-1986, the Society operated a summer camp at the East Troy property called Camp Richards in honor of Fr. Herman Richarz. The money from the camp provided financial support for the school. Labor costs and insurance liabilities would eventually force the camp to close for good.

In March 1950, a devastating fire broke out in the gymnasium that was built just 10 years prior. A new gym, chapel and boiler room were built and dedicated in 1952.

Both the camp and the school saw growth in the 1950s. From 1953 to 1961, an annual play about the Mysteries of the Mass was performed for the public on Passion/Palm Sundays.

In 1955, religious sisters arrived at East Troy to cook and help with the laundry. A convent was built on the property, which served as their residence. Sisters continued to serve at East Troy until 1970, when the East Troy community started hiring laypeople to work in the kitchen.

In 1963, a new residence called Tien Hall was completed for priests and Brothers.

Mr. Lou Wappel was the first layman to serve as dean of students and later as principal of the high school. 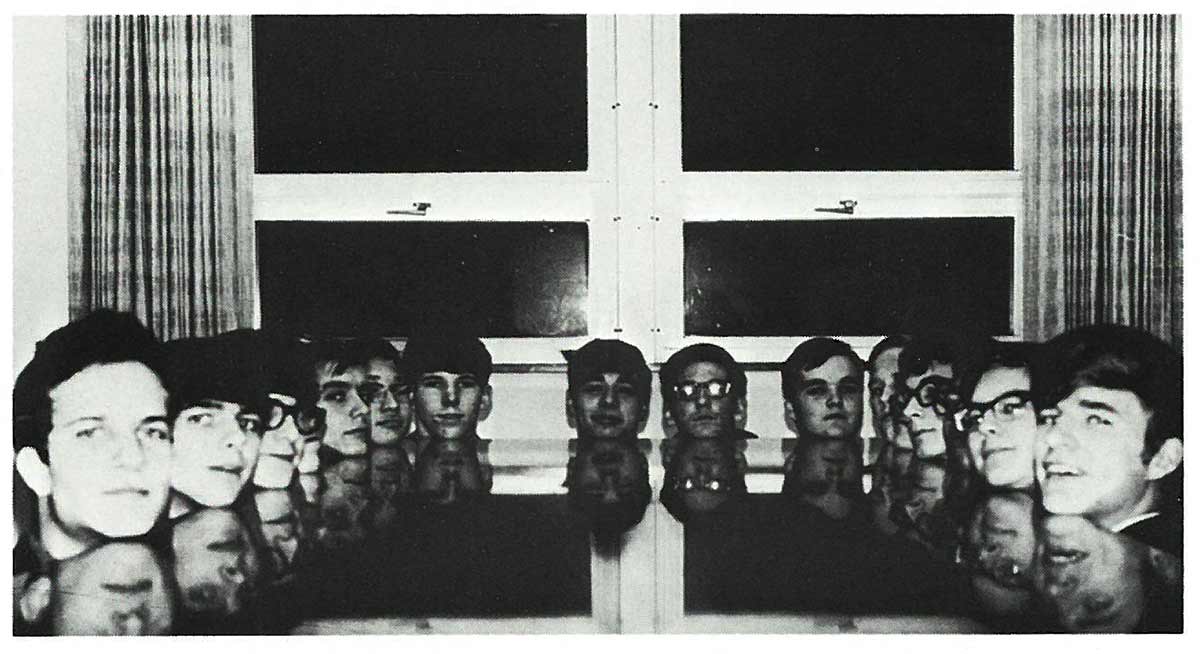 The Student Senate of 1969 "reflecting" on important business.

In the 1980s, enrollment declined and tuition rates climbed. The number of East Troy graduates who continued with the SVD in preparation for the priesthood or Brotherhood also decreased.

Ultimately, the Provincial Council decided that these mounting obstacles were just too great to overcome. In 1991, the school was closed and two years later, the school building, chapel and gymnasium were demolished.

Today, the property serves as a Divine Word retirement community and a place of hospitality, vacation and retreat for SVD members and other religious. The Holy Spirit Missionary Sisters continue to use the convent as a place for retreat, as well.

East Troy was home to 166 SVD priests and brothers.

The text of this page is an adapted version of Communities of the Word, the East Troy Story by Fr. Edward Peklo, SVD.