As the number of Divine Word Missionaries in the United States increased during the early 1900s with the success in Techny, Illinois, leaders decided to open another mission house in the eastern part of the country. In 1912, the Society purchased two adjoining farms in Girard, Pennsylvania. Each of them contained a house.

In the early days, one of the buildings was occupied by priests, brothers and seminarians who lived and learned in the space. The first floor housed the chapel, visitors’ parlor, refectory, and kitchen. Upstairs, the second level was used for classes and study halls during the day and by night, the rooms served as bedrooms. The attic space was used for seminarian dormitories. The other house on the property served as home to Holy Spirit Sisters, who contributed primarily in the kitchen. 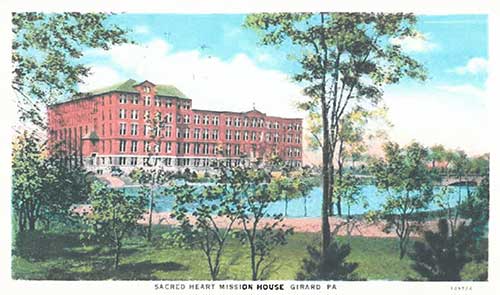 In 1916, the seminarians were transferred temporarily to Techny while a larger seminary building was constructed in Girard. The new Sacred Heart Mission Seminary was dedicated on September 8, 1918.

Just one month after the dedication, ten seminarians applied, hoping to begin their journey as missionary priests. It was an early sign of the interest that the new school would draw over the next few decades.

During the 1920s, growing enrollment figures lead to multiple expansions. Two ponds and a bridge that lead to the seminary’s front steps were added to improve the outdoor beauty of the grounds. In 1921, an additional 145 acres of land was purchased nearby for farming and raising cattle. Then in 1924, leaders determined that the original structure couldn’t accommodate the mission house community anymore, so ground was broken on a west wing addition. It included a chapel, auditorium-gym, music room and swimming pool that was billed to the generalate in Rome as a “Roman bath,” after the initial pool design was rejected. In 1927, a new convent for the Holy Spirit Sisters was completed and in 1928, permission was granted to add a fourth floor to the seminary.

When the North American Province was divided into three new provinces in 1940, Girard was selected to serve as the headquarters for the Eastern Province. From 1934 to 1941, Sacred Heart Seminary served the entire Society of the Divine Word in America as a central college.

At its height, the four-year high school served 192 students. Pupils had very busy schedules, which helped distract them from any potential homesickness. In addition to math and English, the school offered classes in Greek, Latin and German. Outside of the traditional classroom, students could get involved in intramural sports, drama, public speaking contests, singing and music lessons.

In the mid-1960s, high school seminaries across the college began to close, one after another. Enrollment at Girard, like many similar schools in the country, declined rapidly. In 1968, the Holy Spirit Sisters relocated to their motherhouse in Techny. The following year, the Society sold the farm in Girard, as it was no longer needed to feed a large community. Around that same time, the SVD high school students and some staff members moved to the diocesan high school seminary, St. Mark’s, in Erie, Pennsylvania.

At that time, the Sacred Heart Seminary buildings served as the administrative and financial center for the boys and SVD teachers at St. Mark Seminary. For a decade, a few priests and brothers did their best to maintain the complex but as time passed, the buildings deteriorated and at one point, vandals broke in and did damage to the deserted seminary building. In 1988, Sacred Heart Mission Seminary was demolished. The bodies in the cemetery were moved to Techny.

In 2005, the Society of the Divine Word sold 400 acres in Girard to Mercyhurst College, which had plans to develop a two-year college, but the project never came to fruition.

Today, what remains of Sacred Heart Mission House and the grounds that were once immaculately maintained is an unkempt jungle of bushes and trees.

The text of this page is an adapted version of Communities of the Word, The Girard Story by Fr. Raymond Quetchenbach, SVD.