In 1956, Divine Word Missionaries opened a minor seminary in Riverside, California. The school was developed on a property with rich historical significance. According to the seminary’s website, the location was part of a large La Sierra land grant. The Hole Mansion, also known as the Stone House, is situated in the center of the property and was built in 1912. In 1980, the Riverside Cultural Heritage Board designated it as a city landmark. 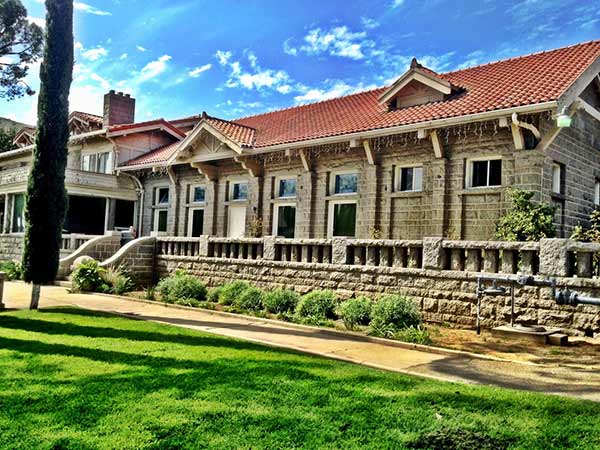 When the seminary opened, it was part of the Southern Province. In 1964, a Western Province was established and Riverside was selected as the headquarters of the newly-formed region.

From 1962 to 1987, the Society operated a Divine Word Summer Camp for children ages 7 to 13 on the site. At the end of the school year, seminarians prepared their classrooms to be used as dormitories for the campers. For the 25 years that the camp was in operation, it served as a major resource for funding the seminary.

The first African-American brother to profess vows in the Society of the Divine Word, Bro. Vincent Webb, shared his culinary skills at Divine Word Seminary in Riverside for 31 years. He started in 1966 and left a lasting impression on the community. He was especially known for his delicious lamb cakes, which he made by the dozens and distributed as Easter gifts.

The structure of the formation program at Riverside evolved through the years. Seminarians lived and studied at Divine Word Seminary until 1967. For the following ten years, SVD students lived at the seminary with room and board, but their high school education was provided at Notre Dame High School in Riverside. Due to low enrollment and staffing challenges, the seminary stopped offering on-site housing for students in 1978. At that time, young men interested in becoming Divine Word Missionary Priests and Brothers started living at home while attending nearby schools. Candidates spent one weekend each month participating in formation at Divine Word Seminary. Despite efforts to make cost-saving adjustments to the program, persistent staffing difficulties lead to the permanent closure of the program in 1982. The Western Province and local SVD Community at Riverside agreed to use the facility for other ministerial purposes.

In the late 1970s, Fr. Michael Manning, SVD founded Wordnet Productions ministries, the Media and Communications Center of the U.S. Western Province. He set up an office and studio in the retreat center building. Today it’s operated out of a studio in San Bernardino, California. The Divine Word Center, as it is often called, also welcomed the Verbo Divino Biblical Program in the late 1990s before it, too, moved to San Bernardino.

The Riverside community has always welcomed retired members of the Society but after the seminary program was discontinued, a new SVD Residence was built to provide expanded accommodations. Today, the Riverside Residence is home to both retired and active Divine Word Missionaries. The section known as the Divine Word Retreat Center features 125 beds in a dormitory-style facility. It also includes a large kitchen, dining room, multi-purpose room with a stage and screen, conference rooms, chapel and more. St. Joseph’s Hall now serves as a place for retreat attendees to stay during their visits.