Perched atop a hill in the small town of Epworth, Iowa is a sprawling structure that’s hard to miss. Visible from nearby U.S. Highway 20, the Divine Word College Campus is perhaps most notable to passersby for the line of brightly-colored flags at the front of the campus. The banners serve as a symbol of the college’s diverse student body and the global reach of Divine Word Missionaries. Since 1964, Epworth, has served as home to Divine Word College but the property has a long and storied history that began much earlier.

As the Society of the Divine Word became established at Techny, Illinois, Bro. Wendelin Meyer and his colleagues continued their work selling SVD publications to German Catholic immigrants living in the Midwest. During his travels, he found a great deal of support in Iowa, so it didn’t take long before thoughts of establishing a minor – or high school – seminary there drew more and more interest.

Meanwhile, in 1918, the rector of Mount St. Mary’s Seminary in Cincinnati, Monsignor Francis Beckman, decided to answer the call to meet at Techny to discuss the creation of the Catholic Students’ Mission Crusade, to support foreign missions. As a result of the meeting, he became a good friend of the SVD.

Beckman was appointed Archbishop of Dubuque in January 1930. Hearing that Divine Word Missionaries wanted to establish a minor seminary in Iowa, he invited the order to come to the archdiocese and suggested that it purchase a 16-acre parcel with eight buildings west of Dubuque in the town of Epworth. The site had been a former Methodist seminary, and for a short time a military academy, but the buildings and property had been vacant for several years. The property was purchased in 1931, and on Oct. 30, 1932, Beckman presided over an open-air dedication Mass for St. Paul’s Mission House, predecessor of Divine Word College. 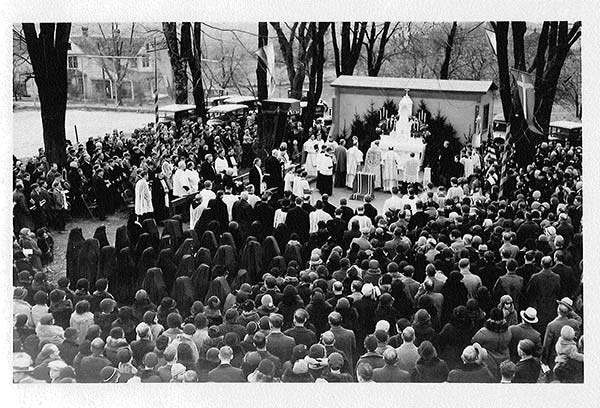 In 1949, St. Paul’s ceased being a minor seminary, and became the junior college for the SVD in the U.S. It continued in that mode until 1955 when it became a so-called “belated” school for young men who came from public schools and needed advanced study of philosophy and theology to enter the major seminary.

In the 1950s, there was a move nationally for accreditation of educational institutions. In 1959, the SVD leadership decided that though its primary purpose was to educate men for missionary service, they should also be offered an education that could provide a basis for a secondary profession. In the early 1960s, it was decided that the Society needed a four-year liberal arts college and its property in Epworth was chosen for the site because of its central location in the country.

On July 10, 1962, Fr. Nicholas Bisheimer, SVD, provincial of the Northern Province based at Techny, broke ground to begin the two-year, $3 million construction of Divine Word College Seminary. It was designed to accommodate 160 seminarians and 25 faculty and staff. 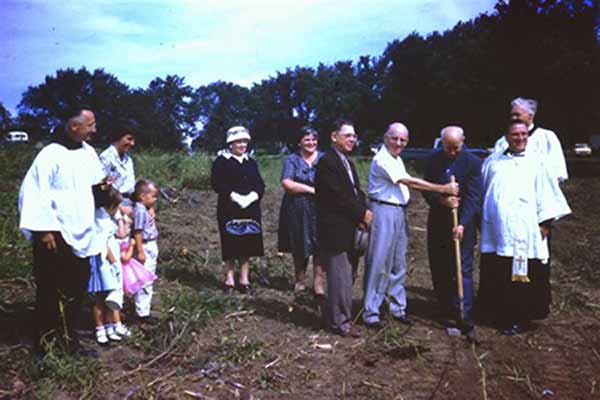 The footprint of the massive structure spans the length of two football fields and is more than a football field wide. The building was completed in 1964. That fall, 64 freshmen from SVD high school seminaries started at the two-year junior college.

In September 1965, DWC became a four-year, liberal-arts college and welcomed students from the novitiate at Conesus, New York and the two-year liberal arts program at Miramar. The student population leaped to 186 students. That same year, the college opened its swimming pool to the surrounding community. Fr. Matthew Jacoby, SVD gave swimming lessons to area youth and became widely known.

In 1975, DWC welcomed 16 Vietnamese seminarians, refugees after the fall of Saigon. The decision would spur the development of an extensive English as Second Language (ESL) program and a student body fortified with increased numbers of international students. In 1976, the first Lunar New Year celebration was held at the college. The annual celebration grew in popularity over the years until it outgrew the dining hall and had to be moved to the gymnasium.

In 1985, the college held the first International Food Fest following the annual Mission Sunday Mass. The popular event is the largest public event held each year. Students, faculty and staff prepare foods from around the world for the celebration and share their culture with all who attend.

In 1996, the college initiated Friends Across Nations or “FAN” Club. It connects international students with area families and continues to be a great success today. In 1998, the first woman graduated from DWC as one of two recipients of the Joseph D. Simon, SVD, Diversity Scholarship.

The first group of “Lost Boys from Sudan” arrived at DWC in 2002. Over the course of the next six years, 36 young men arrived, all victims of a decades-long civil war in Sudan.

In 2006, four religious sisters who were members of the Holy Spirit Missionary Sisters (SSpS), an affiliated order of the SVD, became the first women religious to enroll at DWC. As the student body changed, so did the overall mission of the college. In 2009, the Divine Word College Board of Trustees approved a new mission statement, which formally allowed for the enrollment to include religious sisters, seminarians from other Catholic orders and lay persons. Today, women account for almost half of the student population and represent a variety of religious congregations.