In an effort to recruit more vocations, the Society of the Divine Word opened a minor seminary in Perrysburg, Ohio in 1956. The 374-acre farm was 12 miles from downtown Toledo, had a beautiful building site on a bluff overlooking the Maumee River and was adequately secluded.

The old stone house on the property was remodeled and used as the priests’ residence. It also served as a chapel with three altars, and dining space for 25 priests, Brothers and students. A garage was converted into a classroom and study hall on the ground floor and an apartment on the upper level housed two Brothers. The tenant’s house was converted into a dormitory that could house 20 boys, the prefect, and another Brother.

There were 17 men in the first class at Divine 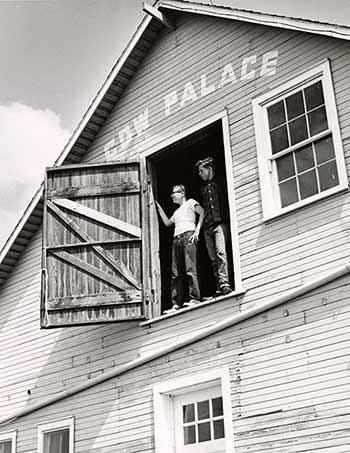 Word Seminary. The accommodations were meager at first, but eventually major seminarians from Techny remodeled a cow barn for indoor recreational use. Known as the “Cow Palace,” the space included table tennis, checkers and chess. The nearby Maumee River was not suitable for swimming, so students loaded into the back of a dump truck and ride four miles to a swimming hole that was originally dug out as part of a highway overpass project.

By the second year, 31 new high school freshmen arrived and 13 sophomores returned. School organizers realized they needed more space. The Superior General, however, wasn’t convinced after just one year that the seminary was capable of producing a significant number of vocations. The Generalate suggested that Perrysburg leaders come up with a less expensive, temporary solution. They settled on constructing a small but substantial building that could temporarily serve as a seminary until a larger structure could be completed. The prefab construction building included dormitories, a chapel, a kitchen, classrooms, and a study hall. It was finished in June 1958 and later converted into a retreat house.

By December 1958, Rome granted permission to build a new, permanent seminary building. Plans for the next phase of Divine Word Seminary at Perrysburg were quickly started. An interconnected four-building facility was approved at an estimated cost of $1.35 million. In 1961, the school dedicated the new buildings, which were equipped with a chapel, kitchen, refectory, classrooms, dormitories, gym and residence for the priests and Brothers. 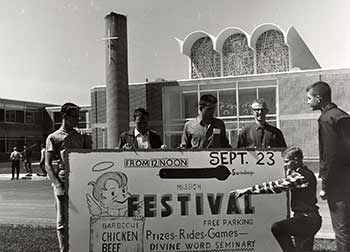 In 1961, five Franciscan Sisters of Our Lady of Good Counsel arrived at the seminary and moved into the old stone house. They were formerly missionaries in Cuba and were exiled to the United States. The sisters worked in the kitchen and took care of the laundry.

Divine Word Missionaries returning from their work overseas often visited the school to share their experiences with students. The school also held an annual picnic and fundraiser called the Mission Festival. In 1965, enrollment peaked with 170 students and in 1966, the largest graduating class of 29 students completed their educations at the school.

In the late 1960s, there were frequent changes in the personnel at the school and priest educators were overextended as they tried to serve their students, perform administrative duties and help local parishes.

In 1968, enrollment numbers declined by 30 percent but then leveled off from 1968 to 1981. In 1982, the student body at the seminary dropped from 70 students to 30. In the years that followed, the numbers continued to decrease.

In 1983, 20 students from Holy Spirit Seminary, a nearby diocesan high school seminary, moved to Divine Word Seminary. While the formation program continued at Perrysburg, all of the seminarians started attending St. John’s High School in Toledo, Ohio for their academic educations.
As enrollment figures continued to dwindle, leaders found it difficult to justify the maintenance costs associated with the expansive facilities at Perrysburg. In June 1986, Divine Word Seminary at Perrysburg closed after 30 years.

The seminary property was sold to a local developer in 1993 and the buildings were later razed. Today, the former site of the seminary is a subdivision for luxury homes called The Sanctuary.

The text of this page is an adapted version of Communities of the Word, The Perrysburg Story by Mr. George Irish.